A Visual Wonder: Life of Pi 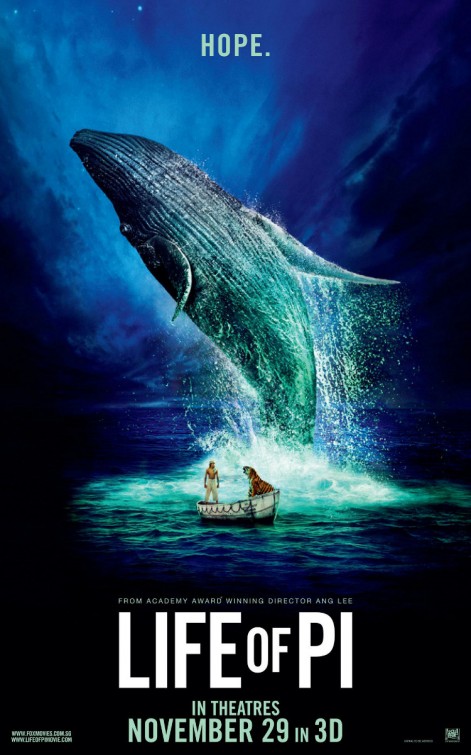 Yesterday, Mac pulled me out of the office to watch the movie "Life of Pi" in 3D. I was not able to read the book so I barely had any idea of the story. All I know is there's a boy and a tiger in a boat. What am I suppose to make of that? But the good thing about having no clue of the story line is it kept me at the edge of my seat from start to finish. Every scene was a surprise so I was like whoah-ing and oh-my-gosh-ing the whole time while holding firmly on Mac's hand. I don't know if the people around us heard me as I verbalized my astonishment. Totally embarrassing but I couldn't help it. I know it's not a thriller movie but it was all exciting for me nonetheless.

"Life of Pi" is based on the best-selling novel written by Yann Martel about a young Indian boy named Pi Patel. Pi finds himself in the middle of the ocean after a tragic shipwreck and shares his unique adventure with a rather unlikely cast away companion Richard Parker, a wild and feral Bengal tiger.

The story is far from shallow but very easy to take in so you can keep your mind busy absorbing the display of cinematic beauty. A total feast for the eyes. I highly recommend you guys watch the movie in 3D if you want to fully appreciate the awesome graphics. Ang Lee created an unforgettable masterpiece that will keep your eyes wide open in amazement.

Enjoy the beauty of nature, of India, and of the human spirit. 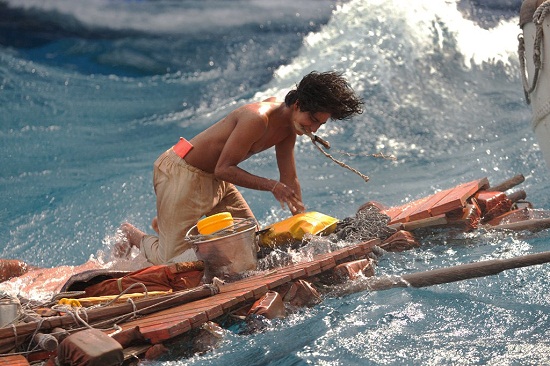 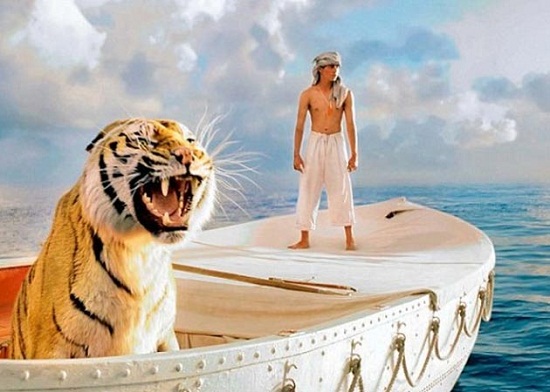 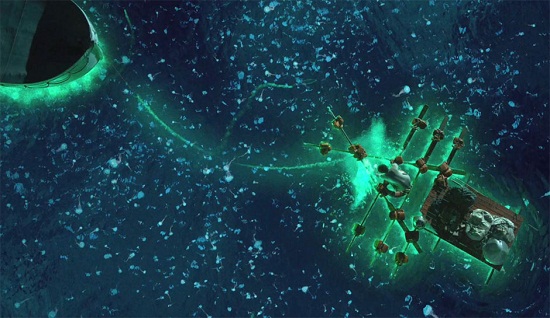 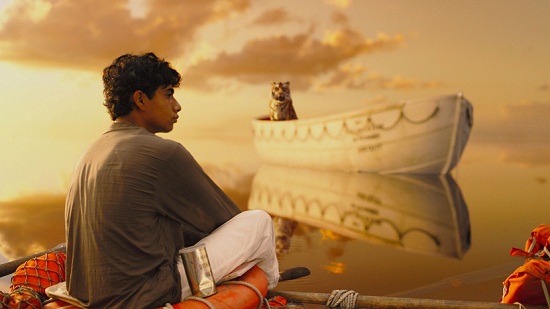 Labels: accessories, fashion, kate spade, personal diary
I got this Kate Spade purple journal for a good (actually wonderful) price at 158 Designers Blvd. The phrase "BIG SECRETS, BRILLIANT IDEAS" is printed on its cover in gold. Most of the items are on sale and this one got a major discount so I bought it no matter how mundane an item it is. You guys might want to drop by. 158 Designers Blvd. is located at the ground floor of the new Eastwood Mall.
Words by KC 2 comments

Labels: friends, personal diary
Today's the birthday of our beloved friend Raeywen. Death was quick to take him last year in a car accident which broke the hearts of all who love him. And as a way to celebrate the memory of a lost friend, Quino suggested a night out, something we hardly do nowadays. I hate to admit how I've become delinquent to the people I consider to be my second family. It's so easy to say "I miss you." or "Let's hang out one of these days." It's another thing to actually meet and catch up on each other's lives (Voxer messages and tweets not qualified as genuine human interactions in this context). We've already lost a friend to death and we are not getting any younger. So I grabbed the opportunity and showed up to our dinner at Kitchen in Greenbelt 3.

Things are different now since we graduated college. Quino now works in a shipping firm and engages his interest in Fil-Hispanic heritage by contributing to a society magazine and conducting tours to heritage sites around Manila. Benedict is doing brilliantly well in a multinational cosmetics company. Eric is on his way to becoming a doctor. The three of them all work or live in Ortigas so we call them the Ortigas group. And I work in an international bank while trying to revive this blog. A lot more members of the group were absent that night but there are more days to come.

It was a fun night, the kind of fun you cannot ever share with anyone else.
PS: Happy birthday Raeywen!
Words by KC 2 comments


If you haven't heard of it yet, Burberry Prorsum launched its spring/summer 2013 campaign last Wednesday with a very adorable star. Clad in kids' sizes of the spring collection, young Romeo Beckham, son to the celebrity couple David and Victoria Beckham, adds charm and total cuteness to the campaign. Romeo's playfulness and energy reflects Christopher Bailey's vision for his collection. I guess this campaign reminds us of what fashion should be: fun.

You can shop the collection at Burberry Prorsum. 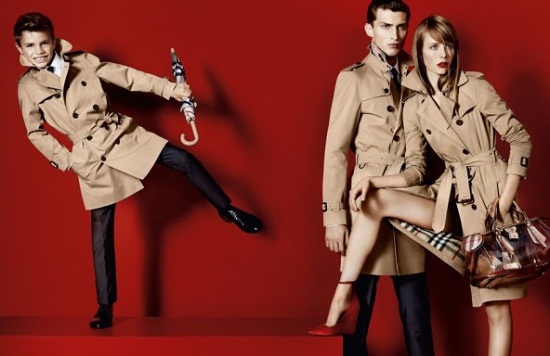 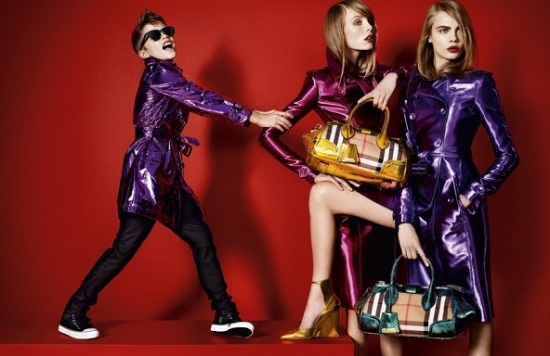 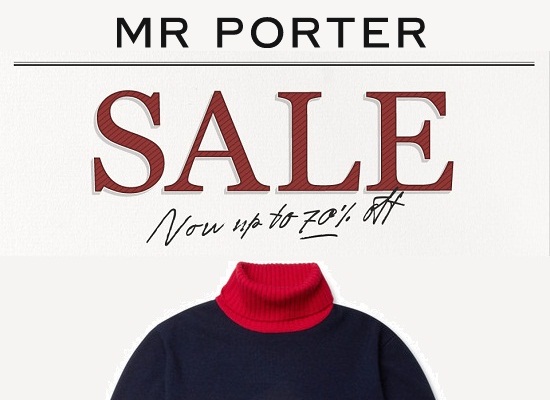 Online store Mr. Porter has intensified it's ongoing sale by further reducing prices to as much as 70% off on clothing, shoes, and accessories. It's a bit chilly here in Manila lately especially in the morning so I looked up knitwear first. I've got a few picks you might want to consider on your online sale shopping. They will surely keep you chic and cozy through the cold season.

Likewise, it's the start of the clearance sale for most stores in Manila. Prices do go lower during the third to the last week of January but stocks are fleeting so you might want to start shopping early before all the small sizes are gone. I'll be trying my luck tomorrow in Makati. Holler if we cross paths.
Shop the sale and find more items at Mr. Porter. 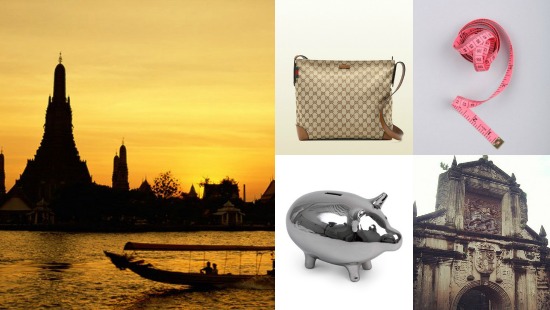 Vacation's over and it's back to the wonderful life at the office for most mortals like me. I believe it was a good first day at work for the year 2013. I was not late in the morning and I got a half day off which gave me enough time to run some errands and have a good run at the oval to shake all that holiday weight. As I'm typing this entry, my body's yearning to lie flat on my bed and rest but my mind is still trying to come up with things to add on my 2013 List.

I've finally gone tired of New Year's resolutions since more often than not people, and that includes me, forget about them halfway through January. I decided to just come up of a list of things I would like to do or achieve this year. The roster has a wide variety of entries from travel to financial investments to charity work and even mundane things like a bag I've been so longing to buy. And every time I get to fulfill something on the list, the item's crossed out and I get bragging rights for it.

1. PROJECT THAILAND
I am no adventurer. The people closest to me know that. I'd rather watch an old DVD than enjoy fresh coconut juice at some remote island paradise during summer. So this year, I'm going to drag myself to explore the world. And I'd like to take my family with me. Hopefully by November, we'll be able to fly to Thailand and make more unforgettable memories there.

2. BUY A GUCCI MONOGRAM MESSENGER BAG
Monogram bags are not my cup of tea but I guess it won't hurt to invest on one. Something small and subtle and really casual would do so I can bring it anywhere anytime.

3. LOSE WEIGHT
This will require a great deal of discipline from me. I really need to cut down on my rice intake. Less salt, more vinegar. And I need to add more vegetables on the list of the greens I can eat. Also, I plan to buy a complete running outfit which would probably motivate me to go to the oval at least twice a week.

4. VISIT A HERITAGE SITE
In grade school, we had field trips to The Walled City of Intramuros, Rizal Shrine, Aguinaldo Shrine, and other heritage sites in and around Manila but I could hardly recall how those places looked. I asked Mac if we could tour those sites again, just the two of us and play tourists. Oh that would be fun.

5. PAY IT FORWARD
I studied at Ateneo de Manila from grade school to college and owe my entire education to the university's scholarship program. I guess it is just right for me to pay it forward in whatever way I can. There were these piggy banks entrusted to scholars like me before we graduated college. We were requested to fill them up to fund the education of future scholars. Mine is still half empty. Clearly, I'm not good at saving money. But this year, I will fill this pig up and help another deserving student have an Atenean education.

And the list goes on. I believe that 2013 will be a good year and that most if not all of the items in my 2013 list will be marked done.

KC
A young man's take on fashion, the arts, culture, and everything beautiful even if I don't know much.
This is not a fashion blog... but I wish it's something close to that.